Co-produced by Wolf Trap Opera and Halcyon’s By the People, an international arts and dialogue festival, featuring dancers from Hong Kong Ballet and Terra Firma Dance

In June 2017, I attended a handsome production of Philip Glass’s chamber opera, The Fall of the House of Usher. This year’s opera collaboration between Wolf Trap Opera and Halcyon, The Seven Deadly Sins, took place at the same unique performance venue as last year, the warehouse space Dock 5 at Union Market. I lamented last year that The Washington Ballet’s former Artistic Director, Septime Webre, who directed and choreographed The Fall of the House of Usher, was leaving Washington, DC, for Hong Kong. It was great to see Webre back in the nation’s capital directing and choreographing again this year, and it was also great to be introduced to a few of his Hong Kong Ballet dancers.

The first half of the production, however, did not consist of Kurt Weill’s opera The Seven Deadly Sins (libretto by Bertolt Brecht), but included an assemblage of songs and sung poems centered around the theme of America called America: the Beautiful, the Blended, the Bared, directed by Susan Stone Li, with musical direction by Joseph Li. I enjoyed this section, which reminded me of listening to an album, perhaps from the 1960s, focused on peace, love of land, and our country’s painful history with regard to race relations. Poems by Langston Hughes followed traditional American folk songs, with iconic music by Paul Simon, Paul McCartney, and Leonard Cohen, among others, thrown into the mix. Five young opera singers (mezzo-soprano Zoie Reams, tenors Piotr Buszewski and Nicholas Nestorak, baritone Johnathan McCullough, and bass Anthony Reed) shared the stage with dancers from Hong Kong Ballet (HKB) and DC’s Terra Firma Dance Company (TFDC). 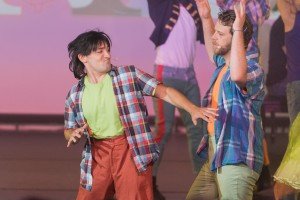 Dancing did not always accompany the music, but when it did, it generally added something worthwhile. The most successful dancing occurred to McCartney’s Blackbird and Wild Honey Pie. Two male HKB dancers, ironically costumed in white, rather than black for Blackbird, elegantly stretched limbs like wings and flew, executing intimate and moving choreography by Trey McIntyre. Stuart Loungway’s choreography for TFDC to Cohen’s beloved Hallelujah swept around and around. Curiously, the dancers wore long layers of black and some even flapped their hands at one point, looking rather like blackbirds! The dancing seemed as dark and heavy as the costumes, and I’m not sure what the connection was to the newspaper clipping artwork by Robert Rauschenberg projected onto the scrim behind them. I longed to feel hope, but that was perplexingly elusive.

Among the young singers, I found Reams the most engaging. Her versions of I, Too, Sing America and Strange Fruit were powerful and haunting and unadorned by dancing. Indeed, no dancing was needed. Reams delivered plenty of punch on her own. The blood red lighting surrounding Reams in Strange Fruit echoed the tragic lyrics that reference black bodies hanging from trees.

I’m not sure where America: the Beautiful, the Blended, the Bared, was supposed to leave the audience. In my view, while the performances were pleasant enough, there was an uncomfortable tension between extolling the physical beauty of the United States and achingly setting forth the racial injustice experienced by many of this country’s citizens. Although I’m sure this tension was intended, the second half of the program didn’t really offer much in terms of hopefulness, either. 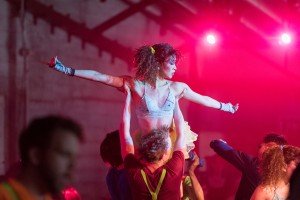 In The Seven Deadly Sins, two Annas, mezzo-soprano Annie Rosen and dancer Ye Feifei, wore outfits like twins — jean jackets, black lace tights, turquoise leg warmers, bright pink silky skirts over an underlayer of yellow tulle (except the dancer’s skirt was noticeably shorter). This sort of twinning was used in The Fall of the House of Usher as well. Kristen Ahern’s bold and colorful costumes worked well with the equally bold and colorful works by featured artist Michael Craig-Martin (who spent most of his childhood in Washington, DC) that were projected onto a scrim behind the action. In fact, the costumes and artwork, along with the the wigs and makeup by Emma Tremmel, may have been my favorite part of The Seven Deadly Sins. Cheerful pinks, especially, stood out, and Craig-Martin’s simple contemporary designs illustrating the various enumerated sins exploded with interest and amusement.

As the opera went on, I grew increasingly impressed with Rosen’s vocal abilities and artistic strength. She appeared to hit her stride in Anger, when she absolutely commanded the stage and belted out her emotions. Her fellow performers, unfortunately, didn’t seem to let loose in the same way. I sensed that the other singers and dancers alike played it a little bit safe, maybe due to nerves on opening night. Rosen alone roared to life in a manner that truly grabbed me. 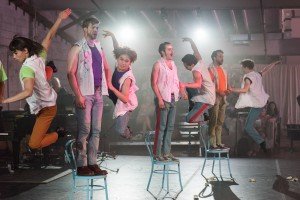 Webre’s choreography for The Seven Deadly Sins was rich with humor, and it complemented both the narrative’s more serious tone and the quirky costumes and art. The actual sins, themselves, though, didn’t always translate clearly. For example, in the Sloth section, a male dancer was lifted and lazily passed around, his body melting like cheese. That made sense. In the next section, Pride, however, Anna, the dancer, also confusingly went limp like a rag doll when lifted up. It seemed odd to me that sloth and pride would share such similar movement qualities. The repeated motif of a male dancer’s arched body, held high, forming a bridge under which others passed through, in contrast, was very effective. This image seemed to represent home — a place where Anna wished to return, and eventually did at the end of the opera.

In addition, I felt, as I did with The Fall of the House of Usher, that the dancing was often distracting and frequently crowded the stage. I continue to believe that fewer dancers and less dramatic movement might work better for these small operas. Yet, without the dancers, The Seven Deadly Sins would definitely have been less enjoyable, as there were many rewarding moments. The over-embellishment of dance is not enough to keep me from wanting to see another collaboration involving Webre and Wolf Trap Opera, nor is it enough to keep me from enthusiastically recommending these productions to others.