I should’ve had this event on my radar before I did, and I almost missed it. I’m glad I didn’t. The Washington Ballet’s former Artistic Director, Septime Webre, who led the company from 1999-2016, was subsequently appointed the Artistic Director of Halcyon Stage. In this new role, Webre curated and produced community programs and performances centered around creativity and collaboration, which allowed him to expand his reach beyond the ballet world, while still remaining involved in dance. As the final performance in the Halcyon Stage season, Webre, in cooperation with Wolf Trap, directed and choreographed a handsome production of Philip Glass’s chamber opera, The Fall of the House of Usher, based on an 1839 short story by Edgar Allan Poe. The strong creative team assembled by Webre included CityDance Conservatory Dancers, the INSCAPE Chamber Orchestra, projection designer Brandon Morse, lighting designer Rob Fabrizio, sound designer Jens McVoy, costume designer Donna Breslin, and makeup and hair designer Jill Turnbull.

Among the standouts in this striking production were Turnbull’s makeup and hair design and Breslin’s costumes. Without the hair, makeup, and costumes, one wouldn’t have gotten the spooky flavor of The Fall of the House of Usher. Glass’s music alone doesn’t really conjure a creepy atmosphere. Webre’s choreography and Morse’s projection designs themselves don’t scream scary, either. There was no doubt, however, with the eye-catching black costumes with heavy gothic influences, the pale ghoulish makeup with undereye circles, and the hard-edged spiked and teased hair, that something dark was afoot. 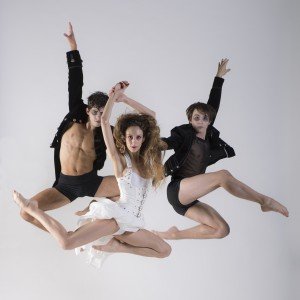 CityDance Conservatory Dancers in The Fall of the House of Usher, photo by Theo Kossenas, media4artists

Another standout in this production was the unique performance venue. Dock 5 at Union Market is a flexible warehouse space. It was arranged so that the audience had an up-close view of all of the action. Although the sight lines were not great for all of the seats, and the seats were not cushioned (except for the fun front rows of the side seating areas, which had white pillowy sofas), the increased intimacy made up for it and permitted a truly immersive 75-minute performance experience, perfect for a chamber opera.

The youthful performers also made a powerful impact. The opera singers and dancers are all at the beginning of their careers (the dancers are all pre-professionals), and many of the musicians looked quite young as well. Their freshness and enthusiasm made Usher positively pop with energy. 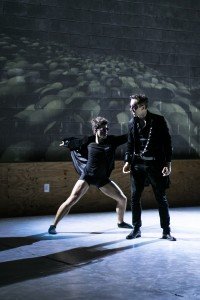 Halcyon, Wolf Trap Opera, CityDance, in The Fall of the House of Usher, photo by Nika Radivilov, IGDC

The projection designs were much less successful, though, and I could have done without them, or with a small handful of static designs. Morse’s designs moved a lot, which competed to some degree with the dancing, and added to a very busy stage. I’m not sure the number of dancers was right for the crowded stage, either. The nine dancers were splendid, but fewer of them might have calmed some of the ubiquitous hustle and bustle. There were many occasions when dancers crossed in front of the singers, or circled around them, and it became distracting at times.

What was missing for me, despite a very enjoyable performance, was the character of the house. In Poe’s short story, the house is responsible for many of the uneasy feelings the reader has. In Webre’s version of Glass’s opera, the house is, curiously, almost entirely absent. I think Morse missed an opportunity to bring the house to life and make it a menacing force. Large print damask wallpaper became tinged with blood and singed with fire, and this did evoke a sense of malignant secrets and impending doom, but the actual cracks and ultimate collapse of the house weren’t clearly conveyed.

Much of the drama in Poe’s story is meant to be ambiguous, though, and I wasn’t bothered by the fact that I couldn’t discern with certainty if Madeline was real, and if so, how she was killed. Her character never sang any words. She floated by, oohing and aahing, and was utterly haunting. 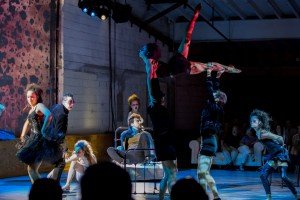 Halcyon, Wolf Trap Opera, CityDance, in The Fall of the House of Usher, photo by Ellie Van Houtte, IGDC

Webre’s choreography could have been more sinister, more quirky, but like Glass’s modern and rather lulling repetitive music, the dancing wasn’t in any way shocking. Webre stuck to largely everyday ballet vocabulary — plenty of pretty leaps and turns, jumps and spins. The dancers, who somewhat awkwardly dropped their dancing personas when they doubled as stagehands and moved set pieces, served as a chorus of spirits, as well as doppelgangers of the three main opera singers (Ben Edquist as William, Jonas Hacker as Roderick Usher, and Madison Leonard as his twin sister Madeline Usher). I loved how the costumes and hairstyles for the dancers mirrored their opera singer counterparts, but inexactly. The male jackets were a close match, but the dancers wore shorts rather than long pants, and the flowing long white skirt of Madeline shortened in the front for her twins, all the better to see the dancers’ legs. The opera singers engaged in a good bit of movement also,  which helped to integrate the dancing of the dancers.

Where the dancing and projections came together best was in a scene late in the opera in which William reminds Roderick of a childhood game they shared. Their doubles dashed around and fought with swords, and the projection design flashed the head of a dragon, enacting the characters’ past. Another particularly effective moment occurred when William was in bed. At first, he was surrounded by dancers. They leaned forward onto the bed, kicking their legs up high behind them, even jumping over the bed. Was he having a nightmare? This seemed to be confirmed when, with the clever use of a huge piece of flimsy black fabric passing back and forth over the bed, William was ultimately revealed to be alone. 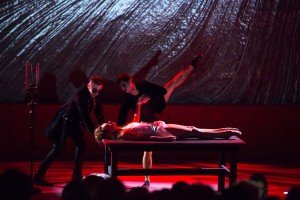 I happen to be a fan of Glass, and although the music gave only subtle background to the horror tale, it worked. As part of a Glass@80 celebration, Wolf Trap also will be mounting a new production of The Juniper Tree at the Barns later this summer. It’s a shame that Weber’s The Fall of the House of Usher was a one-night-only event. The performance was a sell-out, and it would make a spectacular performance around Halloween.

Unfortunately for DC, Webre is leaving to lead the Hong Kong Ballet next month. He will, however, retain his position with Halcyon Stage, but his role will be different, as it’s been announced that rather than curating a performance series, he will launch a festival for creativity in DC in June 2018. Webre will be sorely missed, and I wish him well in his future endeavors. I wonder how this new festival will compare to the yearly Capital Fringe Festival, which is held in July.