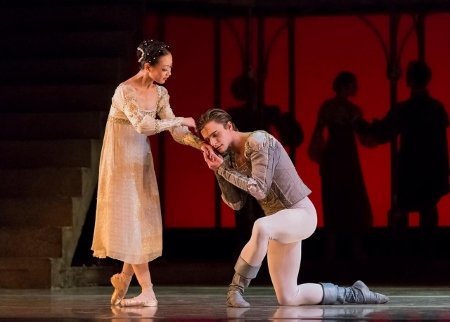 Rarely does perfection come along and you know it when it does. James Canfield’s concept and choreography for Oregon Ballet Theatre’s recent production of Romeo & Juliet was glorious, detailed, and just right from top to finish. Premiering over 25 years ago, OBT audiences cheered on the cast at the conclusion and of the ringing down of the curtain – and deservedly so. It was clear that Canfield had worked through and planned every scene, step, and gesture – each contributing to the overall effectiveness of this now iconic ballet drama. Nothing was muddled and the language of gesture and dance, bespoke of the mood and story. It’s a carefully constructed one, building and arching its way through to the tragic ending, but was never melodramatic.

The choreography gives plenty for both the men and women to do. Too often the men don’t get to show off, yet here they do, and all in the service of the story-telling. Lots of allegro, tours en l’air, leaps, beats, and turns – and often deliciously combined. Lots of great partnering, and a couple of showcase pas de deux – one the famous Balcony Scene with some lifts and transitions into these that I had not seen before. Lovely.

Nashville Ballet’s loaned sets and costumes were perfect too – just the right style, draping, weight, and look, as was Michael Mazzola’s lighting design.

Ah, and then the casting. Who could have wanted more with Xuan Cheng as Juliet and Peter Franc as Romeo. More than just Hollywood Movie Star looks, this guy can really move and has the technique to back it up. In fact, all of the OBT men looked terrific, each more than rising to Canfield’s technical challenges with aplomb. Notable were Jordan Kindell as the menacing Tybalt, Chauncey Parsons and Avery Reiners brilliant as Romeo’s friends. Key to all this is the Nurse, hilariously danced by Makino Hildestad.

I liked how Canfield placed the Mandolin music as “the Lily Dance”  — where Juliet’s friends come in with flowers to wake and greet here on what was supposed to be her wedding to to Paris (Brian Simcoe) but which are instead given over to a bier. Brightly and effortlessly danced by Eva Burton, Ansa Deguchi, Kelsie Nobriga, and Kimberly Nobriga.

Giving welcome warmth, atmosphere and drive to the evening was the mighty OBT Orchestra, led by Maestro Niel DePonte.

We loved, of course, the pre-performance Perspective talk given by OBT historian Linda Besant.

Artistic Director Kevin Irving made a very wise and smart repertoire choice and one that Portlanders will be able to enjoy for many seasons to come. A full cast work that shows off the richness of OBT and how it shines.