Reviewing You Are Here, a public sculpture, sound, and live performance outdoor installation conceived and choreographed by Andrea Miller, Artistic Director of GALLIM, is not a simple task. The production, a Lincoln Center commission, is part of LC’s “Restart Stages” initiative, which is intended to activate outdoor space through artistic and community initiatives “that speak to our current moment and reimagines public space for a new era.”

Co-directed by Miller and Lynsey Peisinger, You Are Here is a multi-faceted presentation that consists of sculptural installations, dance and other movement, and orations. It’s brilliant, innovative, and exhilarating, but it’s also didactic, confounding and annoying – each of which qualities, I think, is intended. Regardless, the bottom line is that from a theatrical and dance standpoint, You Are Here is worth taking the time to see to appreciate the concept and to enjoy the choreography and its execution by the top-notch GALLIM dancers. [Gallim is a Brooklyn-based company initially founded as a vehicle for Miller’s choreography, but which has evolved into a center for a broad spectrum of artist creativity that deals primarily with contemporary issues.] It will be presented through July 30 at LC’s Hearst Plaza. My understanding is that free tickets have already been allocated per the procedure set forth on the LC and Restart Stages web sites, but stand-by tickets may be available. 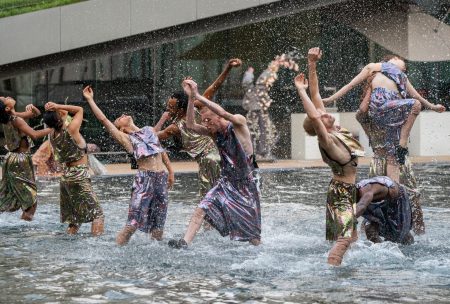 You Are Here is intended to be a reflection of shared experience during the Covid-19 Pandemic: that is, it’s concern is the “processing” of these shared experiences. But the decision as to which shared experience-processing to examine is necessarily selective. Although that’s an artist’s right, the choices made and not made can (and here do) make the piece somewhat politically loaded, and can be seen as validating the issue as presented rather than examining the process. My purpose in writing this review is not to address the validity or completeness of the choices themselves (and in this setting that’s irrelevant), but to make observations about the manner in which these choices are presented.

In the 1950s, 60s, and early 70s there was a television program, hosted by Walter Cronkite, titled “You Are There.” I used to watch it regularly in one of my previous incarnations. One knew that what was being presented was a selective re-creation of real events in the context of a fictional live news broadcast that went back in time to witness and interview those involved in the historical episode. In broad strokes, You Are Here does the same thing, except there are no news interviews (although the sculptural installations do include statements that arose from interviews), and the events aren’t re-created specific events but a created visual recognition or acknowledgment of certain developments that occurred during the past year, whether that be the heroism of those medical workers who treated Covid-19 patients at great risk to themselves, or the societal “awakening” to historical events or policies that may previously have been unfairly or incompletely depicted, or overlooked entirely.

The manner in which You Are Here deals with its subject events and issues is to consider them episodically. That is, a segment will relate to a specific subject area, and that segment may include dance, or music, or spoken word, either in conjunction with each other or consecutively (e.g., an expositional statement alone, or combined with a dance in which the issue addressed is reflected or registered in the dancers’ collective or individual minds and movements). The segments are cleverly introduced by a sound technician / stage manager who announces cues for the audience or the appearance of the next performers. Unfortunately, there’s nothing beyond that delineating a particular segment’s topic (there are no segments or scenes specifically indicated as such in the virtual program) – which I suspect is to give the impression of presenting a continuing flow of events and emerging issues much like what happens in “real life”: the hits just keep on coming. 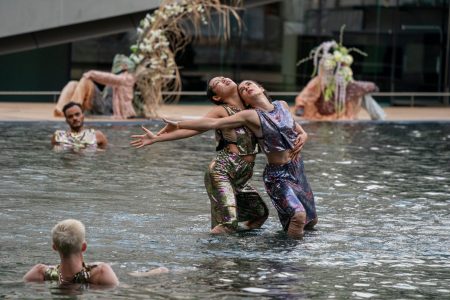 Generally, the 90 or so minute performance flows smoothly, but breaking it up not only into these segments, but into mini-concerts or lectures, in some instances stops, or at least significantly alters, the flow of the presentation. But this didn’t seem to bother any of the attendees at the performance I saw (its formal “premiere”), perhaps to a large extent because at least in its selected subject matter, You Are Here was preaching to the choir.

The best part of You Are Here is the choreographed movement, which, as executed by the top-notch GALLIM dancers, I found to be entertaining and at times gripping. Part of the reason for this is that much of the movement takes place inside the plaza’s reflecting pool, in the shadow of Henry Moore’s sculpture, “Reclining Figure.”

What Miller has choreographed is not some synchronized display of water movement (although effectively that’s what it is), but a meaningful maneuvering of bodies in space that is complex and physically challenging. Given the program’s purpose, I took the water to represent some “atmospheric soup” within which the focused-on developments are represented or reacted to, and the dancers, with some exceptions, to represent “the public” impacted by the developments / awakenings. I may not have always understood what the movement was supposed to represent even though the movement in each segment was supposed to relate to the public’s processing of the segment’s topic, but it was a visual feast nonetheless. 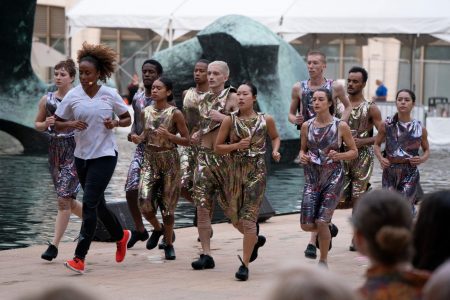 The opening is particularly well-done, and lays the foundation for what follows:. Dancers, costumed in striking identically-styled and somewhat metallic-looking gold-ish or purple-ish outfits that ignore gender differences, slowly and somberly emerge from the area’s “wings,” move in tandem in small groups, and then, line by line, march into the reflecting pool. By contrast, the program’s closing, to “I Want to Dance With Somebody (Who Loves Me)” (the original version, sung by Whitney Houston), also very well done, was alive, celebratory, and infectious, with the meaning of the words in this context being far more comprehensive than was generally understood when the song was first released in 1987.

I counted ten GALLIM dancers, but that number appears to have been fluid, with additional performers immersing themselves during various segments. However many there were, the execution is uniformly fabulous. With rare exception (e.g., New York City Ballet’s Taylor Stanley, a guest artist) I didn’t recognize any of them, but they all deserve to be specifically credited. In addition to Stanley, these dancers were Emily Terndrup (rehearsal director), Lauryn Hayes, Christopher Kinsey, Nouhoum Koita, Misa Lucyshyn, Gary Reagan, Connor Speetjens, Haley Sung, Georgia Usborne, and Amadi Washington. 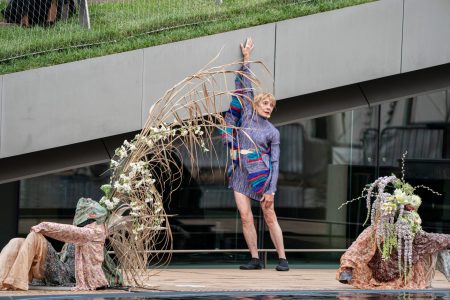 There were also a myriad of what are described as “Portrait Performers” who either appeared in various roles during the production, usually epitomizing or verbally stating (or sometimes both) that segment’s issue, or as pre-recorded voices whose life experience was relayed through the structural installations. Some of these portraits were more successful than others, particularly Susan Thomasson, as what I took to be an aging dancer and fountain of wisdom who appears to find a measure of renewed life (and unfurls her rainbow wings) once immersed in the pool; and Valarie Wong, a nurse, who ran the perimeter of the pool multiple times while stating her reaction to her experiences treating Covid-19 patients. For endurance and multi-tasking alone, she deserves a medal.

Within some of the portrait performances, the GALLIM dancers often reacted to the segment’s topic while in the water, watching. The most powerful of these was the reaction to the Covid-19 runner, during which the dancers followed the runner nurse’s trajectory around the pool with their eyes and body positioning in apparent amazement and appreciation – and then joined her. The weakest, to me, was one in which the dancers who were gathered in the pool simply mimicked the moves being made by a portrait performer (and/or additional dancers) in the “hill” area above the pool. Their arms moved in complete sync with the portrait performer’s arms as if by rote, giving the impression that they were robotically accepting what the speaker was saying or doing rather than being absorbed or affected by it. I doubt that this was the impression that Miller wanted to give, but it’s a way to see it, and it was disturbing. Then again, maybe this was Miller’s intent. 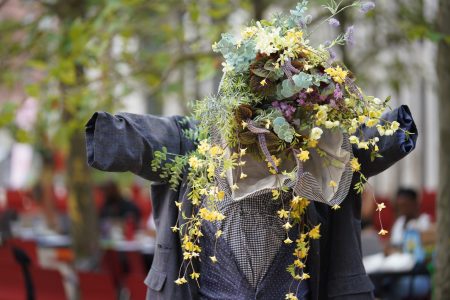 I did not have an opportunity to closely examine all the structural presentations populating the Hearst Plaza that were created by Scenic Designer Mimi Lien, but all those I saw looked intriguing. Some were vaguely human (like a cross between a scarecrow and the ghost of Christmas future), some looked like bizarre floral arrangements, and some looked like fantastical animals. The aural messages delivered (via imbedded speaker), however, were at times unclear or confusing, or without apparent purpose (snippets or just sounds). For example, the sculpture nearest to where I sat wailed hauntingly, and then spoke somewhat inaudibly. Be that as it may, NYCB should consider including Lien’s sculptures in one of its winter season Arts Series inside the Koch Theater.

One final note: in addition to the conception and choreography and the professionalism of the presentation, the costumes were intelligently conceived and executed as well. Credit the Costume Designer, Oana Botez.

Overall, You Are Here is an interesting and somewhat novel presentation of choreography, dance, and immersive theater (literally and figuratively), but one that more often than not simply accepts rather than illuminates the issues it presents. But then, to a large extent that’s what happened in 2020 America … and you were there.