It was standing room only on Monday night when Youth America Grand Prix presented another of its special programs in conjunction with its affiliated “First Position Club.” 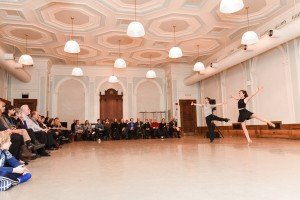 YAGP is the organization that provides scholarship opportunities and master classes for young dancers around the world, as well as an annual competition in multiple international and national venues that continues for nearly a full year and culminates in a week-long finals competition in New York.  In less than twenty years it has become an institution – not only for the prestige of its awards, but for the exposure it provides to young dancers from ages 9 to 19 to be seen by, and to make an impression on, representatives of ballet schools and companies from across the globe.

Goodman’s jazzy, percussive, big band sound has one moving to the music even while seated, but Ulbricht’s choreography made it come alive.  Sing Sing Sing is Dance Dance Dance. Even in excerpts, it’s as much fun to watch as the music is to listen to. 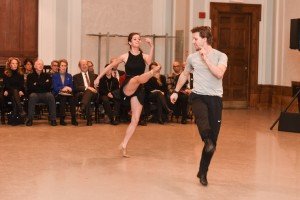 Ulbricht jumped into the piece immediately, peppering the excerpts with comments that indicated the motivation for a particular sequence.  While the movement quality that integrated ballet, jazz, contemporary dance, and Broadway, spoke for itself (and had it’s own vocabulary – like “car wash” and “breakout”), knowing his motivation – the need to frequently change the dynamics of the piece by varying the combinations and utilizing different dance formats; to “finish what you start”; to deliver energy that spans the entire stage while also allowing momentary periods of essential rest; and to give the dancers (themselves) the opportunity to ad lib and inject something of themselves into their execution – not only made sense, but succinctly explains the ebb and flow of most successful choreography, and why, even though the steps may be the same, one dancer will leave a different impression in a role from another. He also emphasized that in curating a dance program, it’s necessary to piece together dances that look different from each other, and that might please an audience – thoughts that seem obvious, but that often are ignored (my comment, not his). 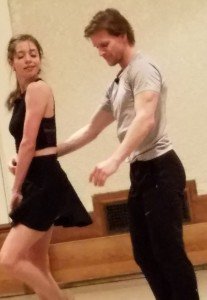 Ulbicht’s frequent examples of ballet bravura (e.g., by my count, at one point he executed three consecutive double tours en l’air, and then repeated them moments later) brought gasps from the audience, and cheers when the excerpt ended.  But his partner also made a sensational impression.  Diniz (who, according to her web site, graduated from Cornell with a double major in English and Theater, and a minor in dance), is trained in ballet as well as other forms of dance. She lit up the stage with her impeccable execution and magnetic personality (including lightning fast changes of facial expression that reflected the lightning fast changes in Ulbricht’s choreographic emphasis).  It was a super non-performance performance by both of them.

Following a year of competitions and semi-finals at venues around the world,YAGP’s 2017 New York Finals will begin on April 7 at NYU’s Skirball Center and the Kaye Playhouse at Hunter College, culminating in the Final Round at the David H. Koch Theater at Lincoln Center on April 12.  It’s annual Stars of Today Meet the Stars of Tomorrow Gala (which this year will include the presentation of its inaugural Lifetime Achievement Award to Bruce Marks, who I saw perform with American Ballet Theatre in the early 1970s, and whose accomplishments as a dancer and artistic director could fill this page) will be at the same theater on April 13, as will a Gala the following night in honor of Julio Bocca, as part of its Legends in Dance series. A complete schedule is available on the YAGP web site.