With Into the Hoods and Some Like it Hip Hop, Kate Prince had notable award winning successes and her new work, Message in a Bottle, is another palpable hit, receiving an instant standing ovation from all the audience. And I enjoyed this show greatly, but with one caveat that I shall come to later. 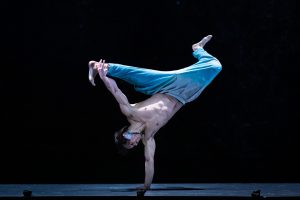 Kate Prince describes the process whereby she approached and enlisted the approval of Sting to allow the music she has loved for so long to be used in her new show. Having gained permission to create a pilot, Sting was entranced by what she had achieved and said that her choreography opened new perspectives on this songs. Prince then decided that she wanted the new work to focus on one of the major issues of our time – migration and refugees. Given Sting’s long term commitment to human rights and the humanitarian messages in many of his songs, this made sense as a theme. The songs have been re-recorded with Sting adding some additional singers and an impressive team, too many to mention, producing an excellent score – much more successful than the Beatles arrangements for Mark Morris’s Pepperland. 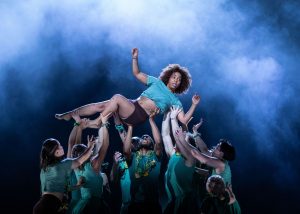 From the outset the dancers burst onto the stage, impressing with their energy, skill and closely synchronised movement. Prince uses a mix of hip hop, contemporary and show dance to great effect, varying ensemble work with duets and solos with the panoply of hip hop motifs. We meet a vibrant, happy group of people and see relationships develop, not always pleasing other family members, but then the sounds of guns disturb the scene. Soon bodies lie on the stage and young women are taken away by force as the songs Little Black Spot and How Fragile We Are take on an even darker meaning. The group are forced to flee by sea and in a storm a woman without a life jacket drowns. The survivors make landfall, but find themselves in detention. 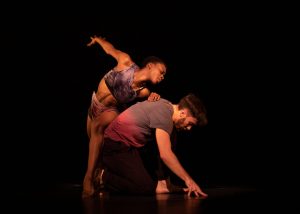 The second half focuses on three refugees and this is where my caveat comes to the fore: a young woman fits into a community; a man befriends and falls in love with a local man; another rescues his love from a brothel to the song Roxanne and Natasha Gooden, Tommy Franzen and Lukas McFarlane certainly make the most of the narrative and the choreography. So, ending on these three happy notes, followed by a rip-roaring finale, the audience are sent home smiling. If only the multiple tragedies of the refugee problem were so easily solved. It is worthy that Prince chose to focus on migration and show some of the resulting suffering, but works such as Crystal Pite’s Flight Pattern with its dark ending have a political resonance that the final stages of Message lack.

Nevertheless, there is much to admire. Tommy Franzen, a Prince regular, is fast and expressive and is matched by the dynamic Samuel Baxter; indeed, all the dancers impress. Set design by Ben Stones, video by Andrzej Goulding and lighting by Natasha Chivers create a vivid background for the dance and Sting’s music provides a strong framework, binding the show together.

“Into the Hoods Remixed” ZooNation

Playlist – an evening of dance diversity